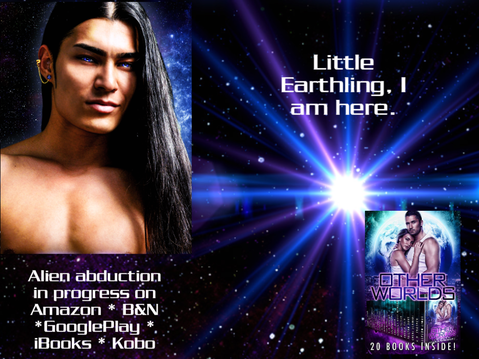 Touch the Stars
This story was part of the Other Worlds boxed book set, which I'm sorry to say is currently unavailable. Once I wrap the Prophecy Series, updating Touch the Stars for release as the first book of a new and unrelated series will be my next project Thank you for your patience.

When her twin disappears without a trace, Kaitlyn Faulks can't accept that she's gone. In her heart, she knows her sister is alive out there, somewhere. One alien abduction later, Kait finds herself on a posh spaceship, the honored "guest" of a sexy seven-foot-tall alien of questionable sanity. He insists she's the heir to his "Star Empire" and that the fate of Earth, and the empire, depends on her compliance. What hooey.

Warrior Baatar must retrieve the Earth woman for the emperor. It is the only way to restore his family's honor and insure that they do not pay the ultimate price for his brother's treachery. But the future empress, Kaitlyn, is a difficult, wily female who challenges him at every opportunity. And Baatar begins to have doubts about the truth behind his mission.

As the stakes rise and the fate of an empire hangs in the balance, Kaitlyn and Baatar are thrust into a conflict decades in the making, where nothing is as it seems, and no one can be trusted.
Lea Kirk, Sci-fi Romance